I’m going to show you how to get a great looking RSpec runner window and not go insane while trying to use it. 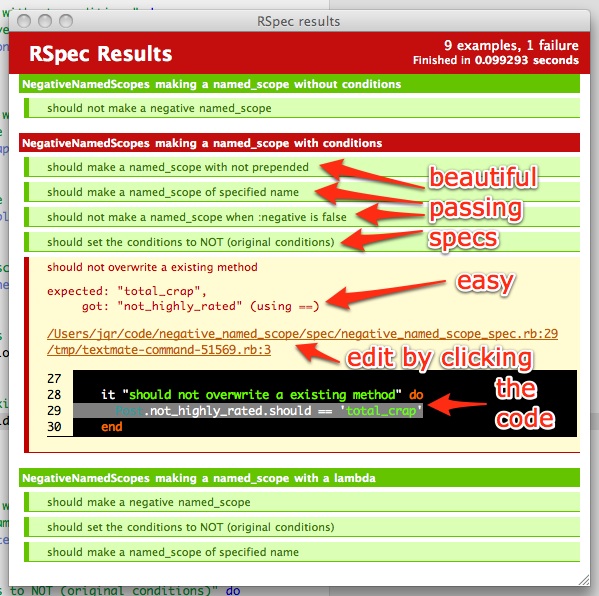 And now the fun begins

The next time you open a spec or regular Ruby file you’ll be started in the mode you last forced. That means you’ll probably have to learn to do that tedious keyboard finger dance quite often.

[Audio] "This shit's getting way too complicated for me." - Barack Obama

We could switch the Ruby and RSpec shortcuts to a simpler keystroke, that would alleviate most of the problem. Except we would still need to press some keystroke to force the mode upon opening a new file.

Running specs needs to be dead simple so people actually do it!

Dot spec has invited you to a party!

There’s a far easier way to solve this problem. Just rename all your spec files to .spec and you will only have to tell TextMate one time to use RSpec mode and it will remember forever!

The steps after switching to dot spec:

You've also been invited to a pre-party!

Who has time to rename all those files? Definitely not you!

There is also a fancy converter for renaming all of your old specs!